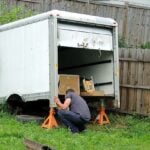 Moving a garden shed can be a bit tricky but it’s possible. You might need a few tools and some creativity, however, you can save yourself a lot of money by doing it yourself.

This blog post is very old. I tried to update it the best I can and chose to leave it here on the blog because I think it might still have value. Maybe it will give you an idea of a way to move a garden shed (or in this case, a truck box), or maybe it’ll just be good entertainment…

I am still using this truck box as a garden shed. You’ll see at the end of this post that we originally dropped it by the house we used to have in town. Since then, we moved to the country and moved the “shed” yet again, this time to the farm (and then got divorced! But not because of the shed…). I own the land now and the truck box is serving me as a place to store garden equipment out of the elements.

So here is the story of moving this garden shed… I left it pretty much how I wrote it in 2014, just moved things around so it’s easier to read. maybe it’ll inspire you!

How to Move a Garden Shed…

My ex-husband found this truck box for free. Free is as cheap as a storage shed can get, so we had to have it. We will use it like a garden shed, for outdoor storage of tools and such. It was once sitting on a truck, but now stuck in the corner of the yard of an abandoned house.

After we had got the OK to pick it up from the new owner of the house, we pulled into the neighborhood with our heavy-duty trailer. After a bit of maneuvering, we backed the trailer up to the box.

Next, we used a high lift to raise one side of the box… We used the floor jack to hold the side of the box up. If you ever attempt this, I recommend placing a thick and wide piece of wood under the jack (so it doesn’t sink into the ground).

We had to get rid of the black bumper. If this thing was on a truck it will be the back of it, where the door rolls up. It wasn’t attached very good, and we needed better access to the frame of the box, so it had to go. It wasn’t that hard, just a few screws.

Did you ever hear about trailer ski? Probably not… We placed a big piece of plywood under the ramps (is that how you call those things?) of the trailer… And slowly drove backward…

And started pulling. Did you ever hear of storage box ski? Probably not.

After pulling a few times, we noticed the back legs (the ones still on the ground) were starting to sink to the ground. They needed skis too. Duh… We lifted each side (with the precious high lift) so that we could slide wood under the legs.

This whole thing took a few good hours, add the heat and the stress and we were ready to call it a day. We drove back home and parked the thing in the driveway for a couple of days.

Originally, we planned on unloading the box at our land, which we are working on turning into a vegetable farm, but then we decided to store the farm equipment close to home since we use it around the yard as well.

We backed up to the side of the house and then parked our recreational Jeep on the hill in front of the box. We connected the cable winch to the chain that was still connected to the box and started pulling the box forward.

Here is what happened next… The front legs slide off the trailer, but in the process, one of the wheels got stuck under the box in a way that we could not pull it out. It caused the box to lean towards the house. I was sitting in the Jeep, with my shaky foot on the break paddle, my blood pressure at an all-time high, my nervous system about to crash, and my hands covering my eyes (therefore the lack of photos here, sorry). I was positive the thing is going to crush my house.

My ex-husband stopped the winch from pulling, took a quick look around the box, then came back announcing that there was nothing to do but keep pulling. The man was cool as a San-Francisco Summer.

So he pressed the button, and the cable started rolling again. I heard several scary noises, but when I opened my eyes, the box was on the ground by the house. No damage to the house or the box, but we did break one of the rare lights of the trailer.

We will have to do this again at some point, when we decide it’s time to move the box to the farm or when we want to sell the house. Will we spend the $300 it cost for a professional to move it? Maybe… But more than likely we won’t. I mean… What’s the fun in that??

20 thoughts on “Moving a Garden Shed the Redneck Way”