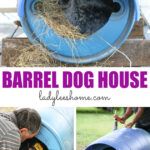 In this post, I’ll show you how to build a dog house cheap from a barrel. We used materials that we already had around the yard so it really didn’t cost us a thing, but even if you need to buy the barrel you can find them really cheap on Craigslist. It is a quick DIY dog house project and my dog absolutely loves it.

I’ve always had a dog in my life. My dad can’t live without a dog. He just can’t, it’s not possible for him.

So, growing up, we always had a dog or two or three. My mother is super clean, so our dogs were always outside dogs but they were around constantly.

As I became an adult, living without a dog just didn’t make sense, so most of my adult life I had a dog around.

When we moved to the U.S., our dog moved with us. She went through so much with us here; moving from one state to another, living over the road in an eighteen-wheeler and so on… Then a couple of years ago we had to put her down.

We were transitioning from the city to the country so we decided to hold off on getting another dog. It didn’t feel normal to live without a dog and the kids kept asking for a puppy, they were missing the presence of a dog too.

So when we moved to the country the first animals we got were two puppies. They were squirrel hunting dogs and we got them thinking it will be nice to try our hand at squirrel hunting.

How to Build a Dog House Cheap From a Barrel…

However, the dogs really wanted to go squirrel hunting and every time we let them out of the dog pen they disappeared into the woods. We can call them until next week, they don’t even hear us…

Here is the problem I had… My chickens free range. The dogs would go off in the woods and I wasn’t able to just stand there and wait for them to finish their woodland adventure so I would go about my business.

The dogs would come back while I was in the house and, frustrated by not getting their hunting done, they would hunt my chickens!

Anyway, I ended up re-homing the both of them.

But I needed a companion… You know, a dog that is a friend. A dog that follows you around the farm and that is gentle with the kids.

Then one day, I found Shayla at the local shelter. She is an Australian Shepherd mixed with Blue Heeler mixed (I think…).

I fell in love with her right away so I adopted her and hoped she’d make a great farm dog.

She does make a great farm dog! She is as sweet as can be, the kind of dog that will let your baby check their teeth. She doesn’t kill chickens and she will just hang around in the yard and follow me everywhere.

However, she loves running everything… She is a shepherd after all. So she’ll run the chickens, and she’ll try to get the goats going if I let her, and once she ran one of the ducks to the road.

It was hit by a car and died which was very sad but we did get to eat it so at least it wasn’t wasted.

She needs to be watched and can’t completely be trusted (I saw her eating a couple of eggs a few weeks ago!) but I am totally in love with her.

I got the friend that I was looking for!

Shayla needed a dog house because as much as I love her, she still lives outside, keeping a small farmhouse clean when you have four little kids is more than enough for me.

I was looking around the homestead and decided to use a couple of the barrels I had laying around. A friend gave them to me for free a couple of years ago and I never really put them to good use (I did build a beehive from one of them, thigh).

Since those are the ones without the removable top I am sure you’ll be able to find them on Craigslist for very little money.

I used a jigsaw to cut a circle in the top of the barrel to make an entrance.

Building the Base For the Dog House…

Next, we made this base that the barrel can sit on.

We cut scrap 1×6 lumber that we had laying around into two 3′ sections.

We laid the lumber on the ground and stood the barrel on top of it. Then we traced the shape of the lip of the barrel so we knew how to cut the lumber in a way that would fit the barrel.

Finally, we connected the two 3′ sections with a couple of pieces of lumber as you can see in the picture.

Next, we positioned the barrel on the base…

And drilled a couple of screws from inside the barrel to connect it to the base. It’s easy to do with the first board but harder with the one that is in the back. We had to wiggle our way into the barrel.

Making a Roof For the Barrel Dog House…

And used the jigsaw to remove both ends (that’s my dad helping me with this project. My parents were here for a visit from Israel and this man can’t sit still if it will save his life, so that was a great project to get done).

We used liquid nail to attach the roof. There might be a better glue for this but we just had it in the shed so we used it. It’s been almost three years since we built this dog house and it’s still holding great.

We made sure to use a good amount of glue…

And then placed the roof on.

We placed a couple of bricks on it…

Just to hold it down until the glue dries.

We cleaned the excess glue and let it be overnight.

In the morning the glue was dry and it was ready to use.

Shayla absolutely loves it! I added some straw in there to keep her warm in the winter and I ended up placing it on the porch because it is her favorite spot.

I only have one problem with it…

The chickens love it too! They keep going in there to lay their eggs and I have to get one of the kids to crawl in there to get the eggs before Shayla finds them because she learned that they taste really good.

I know this dog house will probably not make the first page of a famous magazine but it’s so comfortable for the dog.

You can for sure make it look a little better by making a nicer base but it cost us nothing and it serves its purpose so we’ll call it good and move on to the next project.

As you noticed, I use straw for the bedding mostly because I have it on hand for the other animals and it is very warm, insulating, and easy to clean up.

You can throw a blanket in there or a carpet or scrap fabric… Whatever you have.

Shayla is a medium size dog and it fits her perfectly.

I am now thinking that maybe I should use one of the other barrels to make nest boxes for my DIY Pallet chicken coop… We’ll see about that.