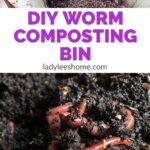 Setting up your DIY worm bin is easy and very cheap. There are a few ways to do it. I choose to just use an old dark bin, the only other tool that you’ll need is a drill. Learn how to set up a DIY worm bin below!

Red wiggler worms can help you turn your kitchen scraps into amazing compost for your plants. This product is called worm castings and if you ask the plants, they’ll tell you that it’s their preferred food!

The nice thing about composting with worms is that you don’t need a lot of space. Even if you live in an apartment in the city or have a very small backyard, you can still produce this amazing plant food while getting rid of your kitchen scraps.

Below, we’ll go over some information about vermicomposting and how to set up a DIY worm bin for composting, and then I’ll share with you the story of how I ended up reviving an old bin that my ex-husband found in a vacant house. It was an unusual way to come about vermicomposting but it worked and I enjoyed this bin for a few years.

Vermicomposting is the process of making compost with worms. Those worms can eat their body weight in food scraps daily, and, like all of us, when we eat a lot, we poop a lot. This can be done very cheaply and doesn’t take much work. The result, the castings, are glorious plant food. I mean glorious! Here is the process:

Worm castings are rich and full of nutrients, it is said that worm poop contains ten times the nitrogen, potassium, and phosphorous that basic soil has. It’s an all-natural plant fertilizer that doesn’t need to break up, it’s immediately available for plants to consume and all those nutrients are exactly what your plants crave!

After you harvest the castings from the bin, you can mix them with your garden soil or make worm casting tea and water your plants with it. You’ll see a noticeable change in the health of your plants within days. I also mix worm castings into my seed-starting soil, it helps the baby plants grow faster and stronger. (Note: if you don’t want to grow the worms but would like to use worm castings, you can purchase castings here, or purchase tea here.)

Set Up The Composting Bin…

Step one is setting up your worm bin. To do that, get a dark plastic bin (should be dark because worms are sensitive to light) and drill a few little holes in the lid or at the top of the bin (on the sides).

To create the bedding, add shredded paper and cardboard to the bottom of the bin. We want to create a moist environment for the worms so it’s a good idea to dip the paper in water. Next, add an inch or so of moist soil on top of the paper. This is optional. You’ll see below that I did it this way but some people just place the worms directly on the bedding.

The last piece of information you need to know in regards to the bin is that it’s best to keep the bin where temperatures are between 50 to 70 degrees.

Once the bin is ready, add the worms. Composting worms are called Red Wigglers and you can order them online here. Simply spill the whole bag of worms with the bedding they have in their bag into your bin. The worms will eat the shredded paper and cardboard so you don’t have to add kitchen scraps right away but you can if you want to.

When you feed your worms make sure to bury the feed. Worms like fruit and vegetable scraps, coffee grounds, washed and crushed eggshells (if you don’t wash the shells they are likely to stink in the bin), leftover food as long as it’s not processed food, and any garden waste. They also like animal manure, like cow or horse manure, but don’t feed your worms meat or oils. And I don’t feed them dairy.

It will take a few months, but at some point, you will notice that it’s time to harvest. There will be a nice, uniform soil-like layer in the bin and by that time the worms will have probably eaten all the paper and cardboard.

To harvest the castings, don’t feed the worms for a couple of weeks. Then bury a handful of feed in one corner of the bin. Wait a couple of days and most of the worms will be in that corner eating the scraps. This will allow you to scoop the rest of the casting out. You can then add a little bit more paper and cardboard to the bin for bedding.

I used to make a really big deal of harvesting the castings, trying not to scoop any worms, but if you scoop a few worms with the casting and add them to the garden it’s completely fine. The worms won’t eat your plants because they are alive and those worms feed on decomposing matter.  Additionally, the population in the bin will recover very quickly because the worms multiply faster than rabbits.

This brings me to another point… If you notice that the worm population in your bin is too high, you can either make another bin and relocate some of the worms, you can gift a bag of worms to another gardener, or you can set some worms free in your garden.

My ex-husband used to work as a locksmith. One day he re-keyed a vacant property and found an old worm bin in the backyard. In that bin, there were no worms. I could see that it was an active bin at some point but it was left outdoors in freezing temperatures and all the worms were gone.

However, in between the dry castings, there was this piece of a paper bag full of worm eggs, and I was wondering what if… What if I could help them hatch, and keep them warm, and feed them, and sing to them, and pet them, and have conversations with them… And we will have a worm nursery, full of babies (I love babies)…

And they will eat and poop, and I will clean their poop (I already clean so much poop anyway, what’s a bit more). Then I’ll spread it in my garden and my vegetables will be so beautiful and tasty and full of nutrients, and we (including the worms) will eat them, and feed others and be healthy and live happily ever after! Ahh, what if…

So I added some wet newspaper to the bin, making sure to wet the piece of paper with the eggs on it because, as I mentioned before, worms like a moist environment, then I closed the bin and placed it indoors.

I didn’t remove the old castings because I didn’t know if there were eggs anywhere else, and if there were, I didn’t want to ruin them. I also didn’t add too much bedding because I just didn’t know if the eggs were actually going to hatch or not so I wasn’t going to spend too much time on it. I did throw in some kitchen scraps in case some worms did hatch I wanted them to have some food. Then I waited about two weeks…

And when I opened the bin two weeks later, I saw a couple of worms! Can you see them in the middle of the picture (above)? I added some more water, making sure there was enough moisture in the bin, and closed it again. I waited another week and then decided it was time to clean the bin and check to see how many worms I had.

I set up a cleaning station outside on the porch and went to work. I put some soil in a bucket where I planned to place the worms that I found and got another bin to collect the castings in. Since this bin was already active before, I wanted to remove the old castings and kind of “start fresh” with my new baby worms.

We found a lot of worms. Maybe 60 or 70 or so. Red Wigglers’ breeding cycle is 27 days so they can double in population every 60 days. Some were big some were tiny. My kids loved helping to find the worms and placing them in the bucket. This is such a great lesson for kids! Not only are they able to care for the worms; feed and clean the bin, but they also learn about amending soil and feeding plants.

And look, look at this glorious poop. It looks like soil, but this is actually worm poop. Just a little bit of this stuff, mixed in your garden soil will benefit your plants tremendously.

I realize the order of things here is a bit different than I described above but it really doesn’t matter. Remember that you need…

I hope this vermicomposting how-to was helpful! Making compost with worms is very simple and you can do it anywhere. I had this bin inside my house for a year and a half and the worm population kept growing. I decided to gift it when we moved to the country because I just had too many new things to set up and care for and I was pregnant with our fourth child. I still think that worm castings are the best fertilizer! I now purchase these bags from Amazon every spring.