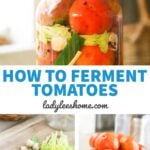 Fermenting tomatoes is a great way to preserve tomatoes without cooking them and it takes minutes to prepare a huge jar. Learn how to lacto ferment tomatoes and use your fermented tomatoes as a side dish, in salads, or add them to sandwiches.

My vegetable garden always consists of tomato plants. The garden just doesn’t feel complete without tomatoes in it. I usually plant a few different varieties, some are especially for canning and some for eating fresh in salads or sandwiches (like my favorite Matt’s Wild tomatoes although, I can those as well).

I can crushed tomatoes, can stewed tomatoes, and I can tomato sauce. We eat a lot of them fresh or I use fresh tomatoes to make pasta or pizza sauce (sometimes I freeze it). There are a million uses for tomatoes, and we always anxiously wait for the plants to produce but there are times during the growing season when tomatoes are coming faster than we can consume them or handle them.

You probably know that tomatoes don’t last too long. I always pick my tomatoes at the green mature stage and let them ripen indoors, but once they are ripe, I know that I have to do something with them or I’ll lose them (and I worked way too hard to lose them).

Canning tomatoes is a great way to preserve them, of course. But to be honest, sometimes, in the middle of the growing season, when I have two million other things to do, I just don’t have time to can tomatoes. To help with that problem, I’ve started freezing my whole tomatoes. I simply throw them in the freezer and they stay there (piling up) until I have time to can them.

But I was looking for another way to preserve them that would be easy and quick and didn’t involve cooking and came across this fermented tomatoes recipe in an old Israeli preserving book that I have. I decided to give it a try and even though I have to admit that I still prefer eating fresh tomatoes or canning a sauce, this was a great way to keep tomatoes “fresh” for a little longer.

Why Should You Ferment Tomatoes?

Fermentation is the process of using microorganisms, such as bacteria or yeast, to convert carbohydrates to alcohol or organic acids under anaerobic conditions. There are a couple of types of fermentation…

Alcoholic fermentation is when we use yeast to break down sugars into carbon dioxide and ethanol. This is the process we use to make beer, wine, and bread.

Lacto-fermentation is the process of using bacteria, named Lactobacillus, to convert sugars into lactic acid. This bacteria (some form of it) is actually present in our digestive system naturally and is also present on the surface of plants.

Lactic acid is a preservative that helps us preserve foods by preventing the growth of harmful bacteria. Lacto-fermentation, which is the process we are going to use to preserve our tomatoes, also increases the vitamin and enzyme levels in the vegetables we ferment.

What Kinds of Tomatoes to Ferment…

Any kind. Fermented tomatoes are a very popular dish in many European countries and as far as I know, they use all types of tomatoes for fermenting.

Size – choose medium to small tomatoes. They are easier to pack into the jar and they take less time to ferment. They also seem to hold better and it’s easier to handle them after they ferment.

Ripeness – for some reason, when I was doing a little bit of research before I fermented my tomatoes, I found a few places that said that you should use tomatoes that are not completely ripe because the ripe tomatoes have more sugar in them and the sugar wants to break down into alcohol in the fermentation process.

These were all American sources. When I looked up recipes from Israel or Russia or other European countries (where this dish is popular), there was no mention of alcohol anywhere and plenty of recipes listed ripe tomatoes. I chose to ferment my ripe tomatoes and I didn’t taste a hint of alcohol in my fermented tomatoes.

So, if you ask me, you can ferment tomatoes at any stage of ripeness. I’ll have a separate post about fermenting green tomatoes, but just so you know, you can even ferment them green. I believe that the noticeable difference is in their consistency after they are already fermented. The ripe tomatoes fall apart a little bit and the under-ripe tomatoes hold their shape and texture better. Makes sense since ripe tomatoes are softer to begin with. Anyway, you can experiment and decide what you like better.

These are the ingredients that I used to make a one-gallon jar of fermented tomatoes. There are really no rules here! You can add more or less of anything, add something different if you feel like it, or change things around. Use this list to give you a general idea…

How to Ferment Tomatoes Step By Step…

Step 1 – prepare the tomatoes. To make it easier for the brine to reach the inside of the tomato, use a bamboo skewer to poke holes in the tomato. No specific instructions here… Just a few holes in each tomato.

Then add some of the celery, garlic, and jalapeno…

Keep adding and layering tomatoes (make sure not to crush them or pack too tight), garlic, celery, and jalapeno until the jar is full, leaving about 2” of headspace. Next, add the peppercorn and just let them fall in between the other vegetables.

Step 3 – add the brine. Fill a four-cup measuring cup with water and add four tablespoons of salt. Mix until the salt dissolves and add to the jar. Do it again until the tomatoes are covered with brine.

Step 4 – let your tomatoes ferment. That’s it. All that is left to do is cover the jar and set it on a large plate (to catch some brine that will probably spill out as the tomatoes ferment). Leave the jar on the kitchen counter at room temperature to go through the fermentation process.

After a few days, the brine will start bubbling and create gas. We have to let this gas out once a day by simply twisting the lid open and then twisting it back (no need to completely lift it).

You’ll notice that the brine becomes really foggy after a few days. This is completely normal…

Once the liquid in the jar is clear again the fermentation process is done and the tomatoes are ready to eat (it will never be as clear as it was at the beginning but much less foggy). With a one-gallon jar, it will probably take a total of around 20 days at room temperature. Of course, if you are using a smaller jar, the fermentation process will take less time.

How to Store Fermented Tomatoes…

The best thing to do is to store these fermented tomatoes in a refrigerator or a root cellar. Around 40 degrees Fahrenheit is best if we want them to last longer. If you store your fermented tomatoes this way, they should last for a few months (6 months or so).

I stored this jar in the fridge and we used it within a month. It’s important to make sure that the tomatoes are still under the brine even after the fermentation process is done and you transfer it to the fridge. Also, it’s important to use a clean fork or spoon every time that you want to fish out a tomato.

Sometimes I get this thin white film on the top of the brine. The white film is called kahm yeast and won’t hurt you. I want to let you know that I never throw away my fermented goodness. I scoop the film out and keep eating my food.

How to Use Fermented Tomatoes…

Fermented tomatoes are soft, tangy, sour, yet still hold the tomato taste… It’s an interesting combination of tastes, I have to admit. You can eat them by themselves as a healthy snack. You can add them to sandwiches or salads, or as a side for an egg salad or a tuna salad or a chicken salad (or any other dish, really). I’ve also heard that they are great to make salsa and marinara sauce with but I haven’t tried this yet.

What kind of water should I use when making the brine?

Can I ferment green tomatoes?

Yes! You can ferment any kind of tomato by following this recipe, even green tomatoes.

There are bubbles in the brine and it’s foggy, is that normal?

Yes! After a few days, you’ll start noticing some bubble action and the brine will turn foggy. This just means that the fermentation process has begun. Make sure to twist the lid once a day to allow the gas out for a few seconds before you close the jar again. And watch for the fogginess, once it clears, your ferment is ready for serving.

Can I use less salt?

You can use as little as one teaspoon of salt per one cup of water but no less.

Can I add vinegar to my fermented tomatoes?

Yes! If you like the taste of vinegar, you can add up to two cups of vinegar to a gallon jar. Add the vinegar first and then add the brine.

Can I use different spices?

Definitely! Add thyme, oregano, basil, or sage. Add pickling spice, mustard seeds, chili flakes… Really, there are no rules and the sky is the limit. Add something different each time and take notes until you find the combination that you like best!

Fermented tomatoes are a special and interesting thing to eat, for sure! I hope that this tutorial was helpful and that you’ll give them a try. If you do, come back and let me know what you think in the comments below.

1. You can ferment any kind of tomato this way, even green tomatoes.

2. You can use less salt if you'd like but no less than 1 teaspoon per cup of water.

3. Once the fermentation process is done, store your fermented tomatoes in the fridge or in a root cellar. They should last for months.

4. Make sure that the tomatoes stay under the brine even after you store the jar in the fridge.

5. Always use a clean fork or spoon when you take a tomato out of the jar.

6. Serve as a side to any sandwich or add these fermented tomatoes to salads.