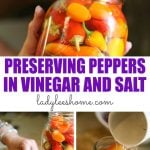 Preserving peppers in vinegar and salt is super easy. It takes minutes to put this dish together and it’s a great way to preserve peppers. It takes a few days to ferment and once it’s ready it’s a healthy and tasty snack or an addition to salads or sandwiches.

One of my favorite varieties of peppers to grow in the summer garden is Lunchbox peppers. They are relatively easy to grow and each plant produces a ton of peppers.

We eat most of them as a snack right in the garden, but since each plant produces so many peppers I’m often left with a lot of peppers that I have to somehow preserve.

Preserving Peppers in Vinegar and Salt…

I do love canning and appreciate the fact that I can store canned goods on a shelf at room temperature, but sometimes I just don’t have time for all the boiling and hot processing. Sometimes, I just need a quick way for preserving that involves no cooking at all.

A couple of years ago, my mother came from Israel for a visit during the growing season and showed me a simple way to preserve peppers in vinegar and salt. It takes only a few minutes to put a jar together, no cooking whatsoever, and the result is delicious. Perfect.

How to Preserve Peppers in Vinegar and Salt…

Step 1 – pack the jar. Start by washing the peppers and getting rid of the stem…

Next, make a little slit in the bottom half of the pepper. If you are doing this with bell peppers, you’ll cut them into large pieces and remove the seeds. The little lunchbox peppers have hardly any seeds in them, so we used them whole but made a little cut so the vinegar and salt can get inside.

Keep going until the jar is full. Make sure to leave about 2” of headspace.

Step 2 – add seasonings. Take one garlic clove and crush it (no need to peel it), then add it to the jar. If you choose to use any other seasonings, add them as well.

Next, boil some water. To every cup of boiling water, add one teaspoon of salt…

Gently turn the jar a few times to mix the vinegar that we added at the beginning with the rest of the salty brine.

Step 7 – let ferment. Since we added vinegar, we should call these peppers pickled peppers, however, they behave much like fermented peppers because there is a salty brine in there as well. So set the jar of peppers on the kitchen counter at room temperature to pickle/ferment for about a week…

You’ll notice that after a few days the peppers start to change their color and the brine starts to get foggy, that’s normal and part of the process. You’ll also notice some bubble action. You’ll see some bubbles starting to rise to the top and maybe some foam forming on the top.

Don’t remove it, but you do need to make sure to burp the jar, or in other words, let some of the gases that form inside the jar escape. To do that, once a day, simply twist the lid open, don’t lift it, just twist it open for a couple of seconds and then close it again.

After a week to two weeks (depending on the size of jar that you are using), you’ll notice that the brine turns clear again. It will never be as clear as it was when we first added it but the fogginess will disappear. This means that your peppers are ready to be served and stored.

You want to store your jar in cold storage. If you have a root cellar, that’s best. If not, the fridge will do fine. The jar can stay in room temperature for a few weeks, however, I find that the peppers soften and lose their crunchiness much faster than if stored in cold storage.

Serving Peppers in Vinegar and Salt…

These peppers are a very healthy snack! Just grab a couple to munch on when you feel the urge for a little snack. I often serve them as a side to a sandwich too. They are a great side for a pulled meat wrap, a bbq sandwich, or a hamburger. They are also a great addition to Southwest chicken chili or a shakshuka dish.

This is such a simple recipe that I think that every homesteader should have on hand, not just for preserving peppers, but for other vegetables as well. I hope that you’ll give it a try!

You can follow this recipe to preserve any kind of pepper, sweet or hot, in vinegar and salt. If you use small or skinny peppers, you can pack them in the jar whole, if you use larger peppers, you are probably going to have to cut them and remove the seeds before packing them in the jar.

Also, you can use this same way to preserve other vegetables too like cabbage, cauliflower, kohlrabi, fennel, carrots, beets, and radish. If you'd like, you can mix a few different vegetables in the jar.

To season your peppers you can use just garlic or you can add dill, thyme, mustard seeds, pickling spice mix, peppercorns, chili flakes, or anything else that you can come up with. Try something different each time until you find your favorite seasoning combination.

29 thoughts on “Preserving Peppers in Vinegar and Salt”