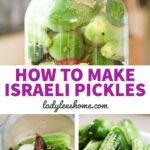 Fermenting cucumbers is an easy way to preserve the summer harvest. In Israel, lacto-fermented cucumbers are basically Israeli pickles, the ones I grew up consuming by the gallon. let me show you how to make Israeli pickles!

There are so many ways to make pickles. Honestly, I didn’t know that there were so many ways to preserve cucumbers and make pickles until I landed here in the U.S. back in 2005. In my home country, Israel, we mostly eat pickles in brine (fermented cucumbers) and some people also like pickles that are preserved in a mixture of salt and vinegar but that’s it. They are the only two kinds.

I was amazed to find out that you can make sweet pickles and that there are so many different recipes for pickling cucumbers. So I got a bit excited and tried a few. I’d choose a different kind at the grocery store to find one that I liked so I could find and use a recipe for that kind of pickle to preserve my summer harvest.

But… I just didn’t like any of them. I don’t like vinegar much and the sweet kind doesn’t sit well with me. The Hamburger pickles are probably the only kind I can eat but they don’t make me too excited. A normal person can’t live without pickles, I’m sure we all agree on that. So something had to be done.

And so, I set out to recreate my childhood pickles which meant fermenting cucumbers. But that wasn’t as easy as I thought it would be. The kinds of cucumbers they use in Israel for pickling is different than the kind we use here. Also, I’ve always just eaten them from a store-bought can, I didn’t have a family recipe to go by.

I’ve tried all kinds of things and it took some experimenting but I think that I can now safely say that I’ve found my recipe. The recipe that produces fermented cucumbers just like the ones I grew up eating. And I am super happy to say that it’s simple and takes only minutes to put together.

What is the Process of Lacto-Fermentation?

Lacto-fermentation means preserving food by using a brine mixture (salt dissolved in water). The brine creates an anaerobic, acidic environment in which bad bacteria can’t grow, therefore, we are able to keep the food longer.

The cool thing about lacto-fermentation is that it’s so simple! No boiling water baths, no special pressure pots or any special equipment is necessary. But maybe the best thing about lacto-fermentation is that in the process bacteria, probiotics, and enzymes that are beneficial to our digestive system are created so we actually increase the nutritional value of the food that we ferment.

I am pretty sure that anyone who has ever fermented cucumbers will tell you that your success (crunchy and delicious pickles) depends on the cucumbers you start the process with. I am no different here. I grow my own pickling cucumbers and I recommend that you do the same. Here are a few tips…

This recipe makes a one-gallon jar of Israeli pickles.

Should You Remove the Blossom End Before Fermenting Cucumbers?

Let’s focus on this question for a minute since there seem to be all kinds of opinions about it. A cucumber has two ends, the end with the stem (where it was connected to the plant) and the blossom end. Rumor has it in the U.S. that the blossom end contains enzymes that can cause the pickle to get mushy and therefore it is advised to remove it. I don’t know, people… I have never met a pickle in Israel that had this end removed and they were all perfectly crunchy.

However, if you are concerned about the blossom end, you have two options…

I like to live on the edge though (and I am also a bit lazy but let’s not focus on that…) so I have to be honest and say that I simply wash my cucumbers with cold water and a sponge with a tiny bit of dish soap. I don’t remove the blossom end and I don’t blanch the cucumbers, ain’t nobody got time for that! And… My pickles always turn out great!

How to Make Israeli Pickles Step by Step…

Step 1 – prepare the cucumbers. Start by washing the cucumbers and, if you want, remove the blossom end or blanch them.

Step 2 – Pack the jar. Make sure to wash the jar well and then pack it half way with cucumbers…

Next, add the garlic, peppers, and the rest of the seasonings…

Before adding more cucumbers to fill the jar. Make sure to leave a couple of inches of headspace so there is room for the fermentation weight.

Step 3 – add the brine. Prepare the brine by dissolving one tablespoon of salt for each cup of water and add to the jar. Keep adding brine until the jar is filled. Leave about an inch of headspace.

Step 4 – let the cucumbers ferment. Close the jar with its lid and place it on a plate. During the fermentation process some of the brine will spill out, the plate will catch it and save you some mess. Place the jar on the kitchen counter or somewhere at room temperature to ferment.

After a few days, you’ll notice that the brine becomes foggy and there is some bubble action close to the top of the jar. This just means that the fermentation process has begun! Remember to let the gas out, or in other words, to burp the jar. Once a day, twist the lid open, wait a few seconds, and twist it back to close the jar again. There is no need to open the jar all the way.

The best thing to do is to store your pickles in the fridge or in a cool root cellar. I usually transfer my jar to the fridge (since I don’t have a root cellar) and once we are halfway through it I start fermenting the next jar.

Make sure that you always use a clean fork to fish a cucumber from the jar and that the pickles stay under the brine even when the jar is stored in the fridge.

I came by this article from the National Center for Home Preservation that explains how to can fermented foods and it’s definitely something that I want to try. However, I won’t be able to do that with a gallon jar, I’ll have to use quart jars instead.

You can serve Israeli pickles just as you’d serve other kinds of pickles. I feel like they taste better when they are cold, so I let the jar chill a couple of days in the fridge before we open it. Here are a few serving ideas…

I only have slicing cucumbers, can I ferment those?

Yes, you can ferment slicing cucumbers the same exact way. Try to use very small cucumbers.

Can I change the spices?

There are no rules when it comes to the spices that you add to the jar. I find that this combination gives me pickles that are the closest in taste to the ones I grew up eating but you can change things around as you wish. Add dill or thyme. Add different kinds of peppers for more heat, add chili flakes or mustard seeds… Really, you can add anything you can come up with.

There is a white film forming on top of the brine, is that ok?

Yes, it’s ok. It’s surface scum or kahm yeast and it doesn’t hurt the fermented cucumbers. Simply scoop it up with a spoon and remove as much of it as you can, then keep enjoying your Israeli pickles. You can also wash the pickles in cold water before serving them.

Can I add vinegar to my pickles?

Yes! I don’t like the taste of vinegar much so I prefer leaving it out but you can add it if you like. I do this in my preserving peppers recipe and you are welcome to check it out. For a gallon jar, you can add up to two cups of vinegar. Add the vinegar first, then add the brine, and when you are done, close the jar and give it a little shake to mix it all together. Then move on with the fermentation process the same way.

This is, hands down, my favorite way of preserving cucumbers! I really want to learn how to can those fermented cucumbers so I can always have jars and jars of them on the shelf. I hope that you’ll give this recipe a try and I hope that you find sour Israeli pickles tasty!

1. Make sure to use small pickling cucumbers. The best ones are 3 to 4 inches long. If you grow your own, pick them in the morning and ferment as soon as possible.

2. If this brine is too salty for you, you can reduce the salt as low as one teaspoon per cup of water but no less.

3. Feel free to change the spices any way that you want. Add different kinds of peppers to add more heat, add mustard seeds, chili flakes, dill, or whatever else you can come up with.

4. If you like the taste of vinegar, you can add up to two cups of vinegar to a gallon jar. Pack the jar, add the vinegar, then add the brine, and close the jar. Give it a little shake to mix the brine with the vinegar. Everything else is the same.

5. If after you store the pickles in the fridge, you notice a white film on top of the brine, know that it's just surface scum or kahm yeast and it doesn't hurt the pickles. Scoop it up with a spoon and discard, you can keep enjoying your pickles.