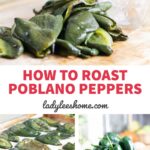 Learn how to roast poblano peppers in the oven to bring out their amazing smoky flavor. Roasting poblanos in the oven is very simple and the roasted peppers can be used in many recipes or preserved for later.

I planted poblano peppers in the garden for the first time this year. Honestly, I’ve never grown or used them before and wasn’t sure what to expect… The few plants that I planted ended up producing a ton of beautiful, dark, heart-shaped peppers!

So there I was harvesting a ton of poblano peppers and wondering how to use them all. They are a popular pepper that is a listed ingredient in so many recipes so I knew that I’d have no problem finding a good use for them. But, you know how homesteaders are… The first thought that always comes to mind is how am I going to preserve this…

How to Roast Poblano Peppers in the Oven…

Aside from a few different amazing recipes, and aside from adding them pretty much in every recipe that calls for peppers (like Southwest chicken chili or Israeli Shakshuka), I figured that I would… can them, of course! I could have just canned them the way I can hot peppers, however, I really like roasted peppers, so I decided to roast my poblanos and can them that way.

Roasting poblano peppers is no different than roasting red peppers, the process is pretty much the same. They have a little bit of a different flavor, though, so it’s nice to have both options on the shelf ready to be added to any dish.

What Are Poblano Peppers…

Poblano peppers are a very popular variety of Mexican chili pepper that originated in Puebla, Mexico. They are dark green and grow to about 4-6 inches. They are meaty and full of flavor. When we think about chili peppers, the first thought that usually comes to mind is their heat, however, poblanos are relatively mild… In fact, some of them are not hot at all.

Poblano peppers are easy to handle. They hold their shape very well so they are a great pepper to stuff, they can also be added to basically any dish that calls for peppers. They can be preserved easily by freezing, canning, or drying (when dried, they are called ancho chilis).

They are easily found in local grocery stores or markets, and if you happen to grow your own garden, they are a great variety of pepper to include for both fresh eating and long-term food storage. You can read more about poblano peppers here.

There are a few different ways to go about roasting poblano peppers. I describe all of them below. You choose which one fits you best. If you feel like firing up the grill… go for it. If you use an electric range like me and don’t have access to an open flame, roast your poblanos in the oven (I’ll show you how to do it below in the step-by-step tutorial).

Step one – prep the peppers. In both the open flame or grilling method, you leave the pepper whole. You can do that when roasting poblanos in the oven as well, however, if you do that, you’ll have to take the sheet pan out of the oven every few minutes and turn your peppers so they roast on all sides.

It’s kind of a pain for me so I prefer removing the seeds from my peppers and cutting them in half before I roast them. So first, wash your peppers, then remove the stem, and then cut them in half.

Line a baking sheet with parchment paper and place the peppers in one layer on the sheet pan, skin side up. Then lightly spray the peppers with oil.

Step two – Roast. Preheat the oven to 400 degrees F and roast the peppers for 20-30 minutes. You’ll notice that the skin bubbles up and separates from the flesh of the pepper, the edges of the pepper might also burn just a bit, that’s fine! It adds a lot of flavor.

Step three – remove the skin of the peppers. Once you remove the peppers from the oven, use a spatula to scoop them into a plastic bag right away and close the bag to hold the steam in. This will help the skin further separate from the flesh of the pepper.

After 10 minutes or so, open the bag and peel the peppers. I don’t use any special tools here, the skin comes off easily. Once your peppers are peeled they are ready to be served or preserved!

How to Store Roasted Poblano Peppers…

How to Use Roasted Poblano Peppers…

Do I have to roast poblano peppers?

Not really. You can use them fresh if you’d like just as you’d use a bell pepper.

Do I have to peel roasted poblano peppers?

Yes. The skin dries and gets hard, it’s just not a pleasant texture. And besides, one of the main reasons to roast peppers is getting rid of the skin. So go ahead and peel!

Should I use gloves when handling poblano peppers?

I don’t. I use gloves when I handle hot peppers but poblanos are not really hot. I’ve never felt that I needed gloves to handle them.

Is there something I can do with the pepper skins?

Yes! You can dry them in the oven (at about 200 degrees F) or in the dehydrator and then grind them to make a powder. Use this peppery powder to season any dish.

Can I use this method to roast other peppers?

Yes! Any kind of pepper can be roasted in the oven the same exact way.

I hope that this simple tutorial on how to roast poblano peppers in the oven was helpful! I love it when a vegetable is easy to grow, easy to prepare, and easy to preserve. It’s like a homesteader’s dream come true. Roasted poblanos are delicious just added to salads or sandwiches, but they also have so many other uses. Definitely something we all should have on hand!